Vacuum therapy for ED as we know it began in 1960 with a man walking into a doctor’s office to resolve his own condition. He was a father, husband, and small business man who ran an automotive business.  He went to his doctor interested in continuing the relationship he enjoyed and lost with his wife due to an underlying medical or physical condition.

He experienced a medical condition and subsequent treatment at the age of 59 which lead to impotence. His doctor advised him to “appreciate the good years” he had with his wife and that nothing could be done to treat his condition. This man would spend the next 26 years of his life creating and gaining medical acceptance for a solution designed for himself that would also help millions of men and couples around the world who shared his condition.

For more information, check out our “Guide to Erectile Dysfunction“.

In 1960 there were no treatments for impotence or ED. It would be 13 years before the first surgical implant to treat impotence would be performed in 1973, and penile injections would not be introduced until 1983, 23 years later.  Viagra would become available in 1998, and with it high levels of visibility and education around ED as a treatable medical condition. 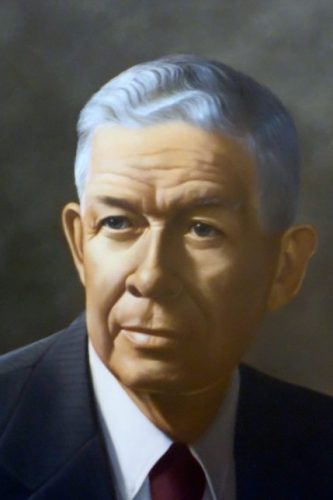 Geddings Osbon was not a doctor, his education was neither from a medical school or college.  In fact, his formal education ended in grade school when he went to work alongside his father and brother to support his family.

He broke away from a family-owned automotive business opened in 1923 by his father Nathaniel Osbon in Aiken, South Carolina.  Geddings desired to make his own way in the world of entrepreneurship.

As the Great Depression was winding down, and US presence in the second world war was coming to an end, Geddings Osbon was starting out on his own. He opened his own small business by the name of Osbon Tire in Augusta Georgia on Broad Street in 1940.

He and his wife Bessie raised 6 children, and his small business was a successful enterprise during the 1940’s, 50’s, and 60’s.

In 1960 Geddings was interested in regaining a lost intimate relationship with his wife, running his automotive business, and spent much of his free time and energy supporting a local church in Warrenville, South Carolina.

He did not know he was beginning a journey that would ultimately change medical history, create a new medical treatment, and start an industry that would endure beyond his own life and improve the quality of life for many couples to this day.

During many years of working with automobiles, Geddings developed intuitive skills founded in knowledge of mechanical procedures.  He opened a retread tire business.  Retreading, also known as “recapping,” is a term used for replacing the tread on worn tires with a new tread.

The method he used was highly reliant upon a process of evacuating air from between the outer surface of a tire and an inner surface of a new tire tread or tire casing using vacuum. It is from this basis of experience that he translated his knowledge of vacuum and mechanical systems to experiment on a solution that would become the modern-day vacuum erection device.

After the popularity and medical acceptance of the vacuum erection device to treat impotence, extensive research was done to determine if any prior reference of using vacuum to create erections could be found.  It is a known fact that no commercial products were available prior to the pioneering work of Geddings Osbon who founded the treatment in modern times.

While Geddings developed the therapy, and created the device, he did not claim it to be an original idea. He also claimed to have no prior knowledge of any historical reference to a vacuum pump for ED.  After his death in 1986 the following references were found.

“The American Physician/Domestic Guide To Health” Dr. John King, M.D. published the following in this 1874 publication on pg. 384: “When there is impotency, with a diminution in the size of the male organ, the organ should be shampooed every day, and a liniment applied to it and the neighboring parts.

“In addition to this the glass exhauster should be carefully applied to the part once, every day, and a liniment applied to it and neighboring parts.”  “The glass exhauster is a cylindrical glass tube, about nine inches in length, and two inches in diameter; one end is open, the other end is fitted with a nipple for a small exhausting pump to be placed upon, the same as a coupling glass.

The male organ being placed in the glass, the air is exhausted, the blood fills the vessels of the part, and thus excites new action.  Great care must be taken not to exhaust the air too rapidly or to too great a degree, as injury to the parts would follow.”

LEDERER PATENT:  Dr. Otto Lederer, a doctor in Vienna, Austria, was issued a patent for his “surgical device” to produce an erection with vacuum.  His product was described as “crude and difficult to use,” no research was ever done and no acceptance by medical peers seems to have existed.  Research did not discover published papers in medical journals nor is there any record of application as an approved treatment. No known commercial products resulted from the 1917 patent.

In 1974 at the age of 73, and fourteen years after being told to “give up” on intimacy with his wife, Geddings formed a company called Youth Equivalent Company, Inc. to manufacture and market his “marital aid,” the Youth Equivalent Device (YED). The design was not a first, but one of many modifications and countless prototypes based upon Geddings original knowledge of mechanical systems and vacuum, as applied to his condition. He would make this model available to other men with a similar condition.  Below is a diagram of the first device he ever marketed. 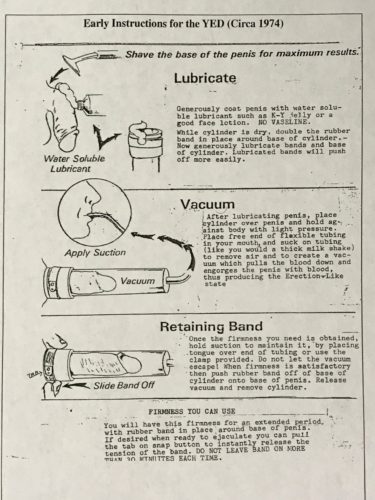 In the words of Henry Hudson, M.D. of Birmingham AL “it was not a doctor who created this product, but it really works.”  Dr. Hudson brought much legitimacy to vacuum therapy in 1979.  He was a past president of the Southeastern Section of the American Urological Association and his open endorsement of Mr. Osbon’s marital aid turned the heads of many respected colleagues who would not otherwise recommend an unconventional “marital aid” to their patients.  Dr. Hudson was one of the first doctors to open the door to medical acceptance for the first ED Pump.

The clinical study that would lay down the groundwork for future medical acceptance of vacuum therapy and the decision to grant Mr. Osbon approval by the FDA was conducted by the Metropolitan Medical Center in San Antonio Texas in January of 1982 and sponsored by Geddings Osbon.  The lead physician of the study was Dr. Perry Nadig, M.D.

On October 5, 1982, 22 years after he was told by his doctor that nothing could be done to treat his condition, the FDA granted Geddings Osbon the first permission ever granted anyone for the marketing of a non-invasive impotence treatment product. Known today as the negative pressure device, vacuum therapy system, vacuum erection device or penis pump, every modern vacuum erection device whether medical or novel is the direct result of the pioneering efforts of Mr. Osbon. 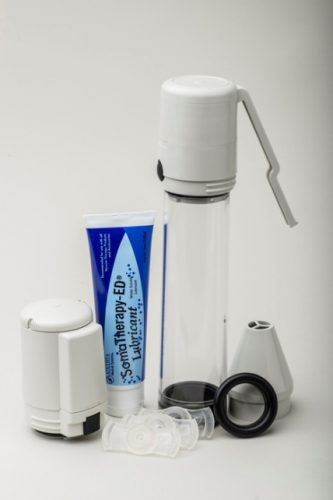 Augusta Medical Systems, LLC is currently located on Broad street in Augusta Georgia and continues the tradition of refining and improving upon the ingenuity started by Geddings Osbon.

By leveraging on clinical experience and customer feedback they provide the finest selection of medical grade vacuum therapy products available.

Contact Augusta Medical Systems to obtain the best in class vacuum therapy device with or without a prescription by contacting us or calling our team today at 1-800-827-8382.